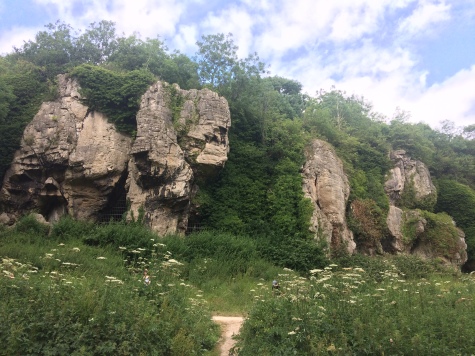 Strange discoveries involving witchcraft and superstition have been made, deep inside a cave on the rural border between Derbyshire and Nottinghamshire.

In the underground spaces at Creswell Crags, walls covered in markings were spotted by experts late last year and identified as witch marks made as far back as the 1600s.

After academics were called in to confirm the authenticity of the markings, those working at Creswell Crags started to realise the significance of what had been revealed.

The biggest collection of confirmed witch marks in the UK had previously been 57 – the new discovery at Creswell Crags has uncovered over 1000 of them and instantly made the protected site one of the hottest tourist attractions of the year.

The Crags is best known for its ice age history – remains of creatures such as sabre-toothed tigers and bears had been found in the caves, along with the internationally significant cave art which is the most northerly example of ice age cave markings in Europe.

But the spooky new witch marks have added a new dimension to a visit at Creswell Crags – and they have attracted attention from media around the globe since the announcement was made earlier this month.

Creswell Crags is one of the top underground attractions in the United Kingdom and one of the most enjoyable visits I made when writing my Days Out Underground book – published by Bloomsbury on March 7.

Check out the Creswell Crags website for details of when to visit and have a tour of the witch marks – all those wishing to see them will need to be booked in to one of the guided tours that are proving incredibly popular.

As part of its’ mission to look after the ice age and witchcraft heritage found within the caves, staff at Creswell Crags – a Site of Special Scientific Interest – made the decision to only take visitors on guided tours so to minimise the impact and not have a constant stream of folk travelling through the site.

When not accessed by a guide, the caves are locked and off-limits, ensuring a sustainable future for the remarkable discovery.

The witch marks at Creswell were visible for many years, but nobody knew they were linked to superstitious activity down the centuries.

There are far too many markings – and they are made over too long a time period – for it to be just a handful of families, so speculation has started as to how so many were engraved on the walls.

The local population in these parts was very small so it’s possible that this was a place of pilgrimage for those troubled by unexplained phenomenon happening in the world.

Creswell Crags is one of 50 subterranean adventures in my new book, Days Out Underground. Signed copies are available from my website today.

I'm a writer who contributes to newspapers and magazines on a regular basis and has also published several outdoor guides to the Peaks, Lakes and Yorkshire Dales. I write educational material for multiple publishers and have just finished writing my first book for Bloomsbury - out in 2019. My new Peak District Year Round Walks is out now. View more posts